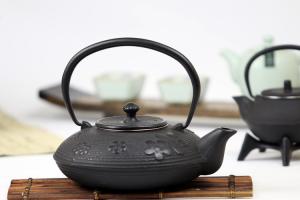 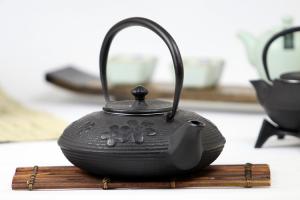 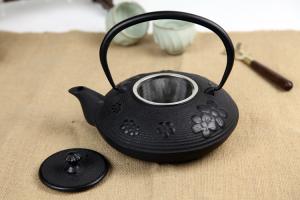 This lovely cast iron pot is admired not only for its Chinese traditional plum blossom feature, but also for its ability to brew the perfect pot of tea. The teapot is enameled on the inside for years of use. Holds 1200ml of tea. Hand wash only.

Teapots usually have an opening with a lid at their top, where the dry tea and hot water are added, a handle for holding by hand and a spout through which the tea is served. Some teapots have a strainer built-in on the inner edge of the spout. A small hole in the lid is necessary for air access inside to stop the spout from dripping and splashing when tea is poured.

The teapot probably derived from the ceramic kettles and wine pots which were also made in bronze and other metals and were a feature of Chinese cultural life for thousands of years. The teapot was invented during the Yuan Dynasty, tea preparation in previous dynasties did not utilize a teapot. In the Tang Dynasty, a cauldron was used to boil grounded tea, which was served in bowls. Song Dynasty tea was made by pouring water boiled using a kettle into a bowl with finely ground tea leaves. A brush was then used to stir the tea.

Received this teapot as a gift last year and love it! It's perfect for the office. I preheat the pot for a few minutes before filling it from the hotwater tap on the office watercooler and I have hot tea on my desk for hours. Had it for almost a year and not seeing the wear issues.